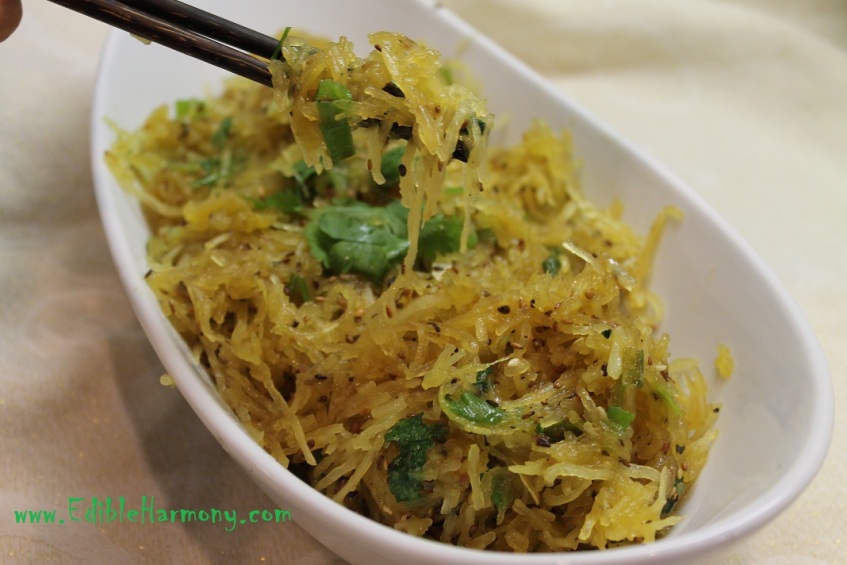 Spaghetti squash is so versatile.  I have used it to replace the noodles in Italian dishes, Asian foods, soups, salads and even desserts. These vegetarian Sesame Paleo Noodles will make you wonder why you ever ate regular pasta before.  It  is so light, flavorful and easy to make. For added protein you can also add chopped grilled chicken, beef, shrimp or mushrooms.

I haven’t posted a recipe in a few days. I have been so wrapped up with discussions on proposition 37. First trying to spread the word, then following the polls, and then recovering from the disappointment of it not passing.

Today I feel a little bit more optimistic, we lost one battle but not the war.  We created more awareness. Before this campaign most people didn’t know what a GMO was.  Now even those who voted no, deterred by the unfounded fear of food prices raising, know what a GMO is. It is also true that the bill wasn’t perfect, so  perhaps now they can re-write and improve it. I have hope that other states may pass it. I know it will be a long battle, but maybe as we start to hear more and more about this issue, some companies will start labeling their products as non-GMO. Time will tell but I sure hope I live to see the fall of Monsanto someday.

View all posts by edibleharmony